What does Kibitzer Mean?

All bridge players use the word Kibitzer to indicate someone who looks how 4 people play bridge. But where does this word come from? And is this word used in a different way?

Wolf  Klewe sent us a poster from the year 1583 in German with very old information about the origin of the word:

KIEBITZ is german for a NORTHERN LAPWING a small inquisitive bird. It has been used as a word for an annoying spectator since, well, attached is a poster from 1583.

The first paragraph defines a person who looks over the shoulders of intent players, so as to worry or annoy them, as a KIEBITZ. He should be thrown out and it then defines the penalties for people who:
1)   watch the play, roll their eyes or mutter opinions, are fined 30 pfennig or a barrel of strong ale, for the common good, and then thrown out
2)   watch the play, and then consider themselves so clever as to give advice, or tell the players that their play is incorrect, gets hit over the mouth, has his cap pulled down over his ears, is beaten up and is then thrown out of the bar.

Wikipedia: A kibitzer is a non-participant person, offering (often unwanted) advice or commentary. This Yiddish term is used in Contract bridge,Chess, Go, and many other games. There is a 1930 film called The Kibitzer which is based on the 1929 three-act comedy play by the same name.

Kibitzer es very popular on-line term. There is a lot of people that use the term as part of their nick in Twitter.

People who use it as part of his blog name and some use it as the name of their chess site.

Left: Trader Vic (Victor Bergeron) is a well known personality in the culinary world. He is also known for his several cocktail-oriented books. Trader Vic’s Kitchen Kibizter could be categorized as a humorous cookbook, the chapter titles alone attest to it incuding: Show-Off Cooking, For Nimrods and The Summer Bachelor among them.

Another Kitchen Kibitzer column: One of the great perks of my job is nosing around other people’s houses—for strictly professional purposes, of course. On occasion, I admit that my interest segues into the personal, especially when it comes to kitchens.

The caption says that “Lessing is watching” so Lessing is probably on the brink of turning into a kibitzer. Painting by Moritz Daniel Oppenheim, 1856 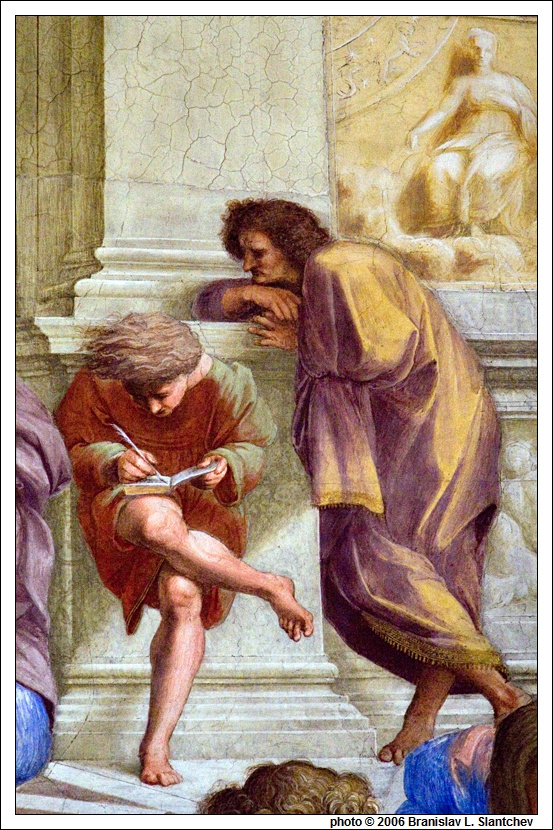 Taker and Kibitzer in Raphael’s ‘The School of Athens’ in Stanza Della Segnatura.

The Bridge Encyclopedia tells a true story about a kibitzer: In a prestigious Bridge Club of New York a two players arrive to a 5-level contract and the opponents quickly double. When defenders won trick 10 the declarer claims the rest of the tricks, contract done. The opponents agree but as the cards remain a little bit on the table a kibitzer who was watching the game says that if the defender would have played at that time a certain card the contract would have been down 1. After a long discussion, the case went to the appeals committee. The final decision was that for declarer: he made the doubled contract, that for the defense: they defeated the contract and for the kibitzer: he had to pay the difference in cash.

The Chinese language has been evolving since 4000 years ago, here we bring you one Chinese symbol that corresponds to the word «kibitzer».

Note: As in other languages many words in Chinese has several meanings.