Trust Your Partner By Shepard Barclay 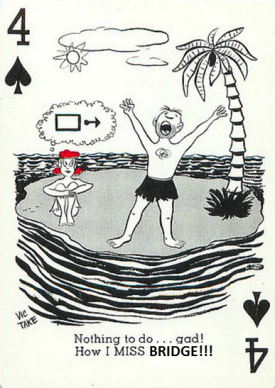 TREATING your partner as if he doesn’t know his business is just as witless in bridge as in the workaday world. When he leads the suit which had been bid by the declarer’s partner, you ought to know he is not making the seemingly worst lead in the entire hand unless he had a good reason for it.

Isn’t it much more likely that he has a singleton, and wants to ruff the suit, than that be has a doubleton? If you figure it that way, you will return the suit to him instead of upsetting yourself thinking about what a bad lead he made.

Dealer: South. Neither side vulnerable

«Why in blazes did he do that?» thought East after West led the club 8. «He knows from my No Trump bid that I have the clubs stopped. But my tricks could come later. Why dont he knock out my stoppers as soon as he can and set up the dummy’s suit for discards?»

Then, after North played low, he took the trick with his Q, South playing the seven.

East noted that the 6 had not appeared, so reckoned West had held a doubleton. He therefore returned a heart and the contract was made. The defenders took only two tricks in each black suit, plus the diamond K.

East should have figured this: «West certainly would not have made such a bad lead as a doubleton of the dummy’s suit. He must have had a singleton.» Had he done this and led his club 5 to the second trick, then another club when he got in with a spade, his side would have scored one more trick and would have beaten the contract.