Scintillating in the side Swiss by Alan Truscott 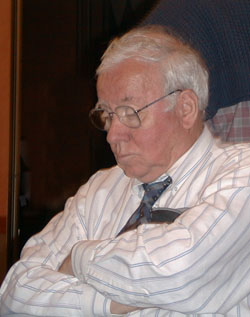 Five players Alan Truscott-Phillip Alder-Holman-Patrick Jourdain-Albert Dormer! seemed enough for an «English» team in the side Swiss Teams last weekend, Two expatriates in New York, one in Perth, one in Wales and only one in London.! But the trouble with journalists is that they have to work at awkward moments, and only three players were available for the third match each day.

Resigned to accepting some incompetent substitute, I asked Press Room boss David Shokman for a suggestion. He recommended Milton Miller, and once I had accustomed myself to his broad Scots accent Ifound he was a star. The last match was against a WBF ‘ team that included one world champion and three players with considerable international experience. This was the key deal:

At both tables South opened 3NT in third seat, ending the auction, in one case West led a low spade and South took nine tricks, in a hurry without needing a club finesse.

At the other M.M. led the

A, knowing that an ace lead, is a good move against this bidding. East played the

10, trying to suggest a heart play, West duly led that suit and the defense took the setting tricks. East won the second trick with the

A and returned a low card. That made no difference, but might have if South had held the queen instead of the jack.

Classic!» was the description of the defense offered by WBF Treasurer Carl Rohan, an admiring victim. M.M,’s team gained 12 IMPs, won the match and finished in a tie for second. If M.M, had played the whole time I think we would have won.

The Best Defense Ever? by Phillip Alder