Monaco Cavendish 2014: The XYZ in Action 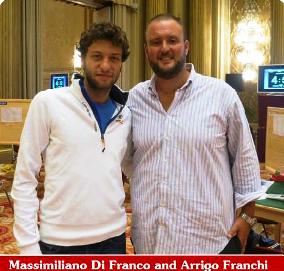 These days it is common to find partnerships that in their convention cards report that they open all the hands with 10 or more points, hence the importance to have methods that allow them to slow down to be able to play at low levels.

In the last session of the Final A of the Open Pairs event two very young players from Italy, Di Franco – Franchi played against Vainikonis – Olanski from Lithuania. This is what happened in:

After North’s Pass, East showed his 4 spade cards with a 1

Many would criticize West for inviting to game with 3

? or if he had declared the game? And what about an optimistic diamond splinter? …

which responder may pass or follow up with an invitational bid, afterwards Di Franco showed his spade support with 2

and that ended the bidding.

This was the bidding:

As you can see in the actual hand three spades are almost imposible to make..and 2

These were the results in the Final A six tables: