Monaco Cavendish 2014: A Poker Bid by a Poker Star 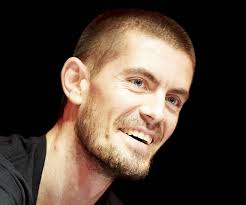 Gustav «Gus» Hansen (born Gustav Jacobsen on February 13, 1974 outside Copenhagen, Denmark) is a professional Danish poker player who lives in Monaco. In his poker career, Hansen has won three World Poker Tour open titles, the 2007 Aussie Millions main event and was the season one winner of the Poker Superstars Invitational Tournament. Before turning to playing poker professionally in 1997, Hansen was already a world class backgammon player and a youth tennis champion. Hansen was voted one of People magazine’s 50 Sexiest Men in 2004.

Gus loves to play bridge and is participating in the 2014 Monaco Cavendish playing with Martin Schaltz one of the best players in Denmark.

and Hansen with the hand below, non- vulnerable decided to bother with 1

BAD LUCK  his partner after East’s 2

After West double, that Hansen must have lived as an All IN… decided a quick scape to 5

But the reality is that there was no escape and he ended paying a number … 1400 … for the amusement of all the kibs who were watching the tournament in BBO.

The four hands were: