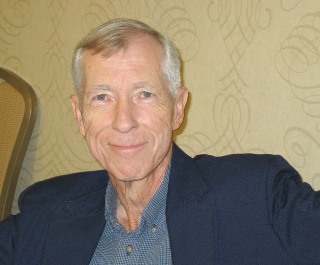 At IMPs you focus on beating the contract. Defense at matchpoints is harder because you must aim at a moving target. Your goal may be to hold declarer to one overtrick or to try for an extra undertrick.

Defending a low-level contract such as 1NT can be taxing. Here, West leads the

5, and your king loses to the ace. Declarer rides the

8 to your queen, and you return the

10 to his queen, West following with the deuce. Next, South passes the

J to your king.

At IMPs you would shift to clubs: West must have something good in that suit to beat 1NT. At matchpoints a case exists for a spade return to let West cash out. At worst you’ll be minus 120, but if you return a club you might find South with:

At matchpoints, defenders often set a trick target that will assure a good result. After South takes the push to 5

and is doubled, West leads his singleton club.

When dummy plays low, East takes the ace and returns the

6. When West ruffs, he should cash the

6 suggests weakness in hearts, but West should settle for down one in any case. East–West already have the better of the deal. South made a los-ing decision to bid 5

would have failed — and East did well to double 5

and to take the

A. East–West will get a good result for plus 200, but if West greedily tries for plus 500 by underleading the West leads his singleton spade, and East takes the ace and returns the

West ruffs South’s king and shifts to a low heart. East takes the ace, cashes the

J and leads a heart, and West collects the jack and king. South is down one already. At equal vulnerability or if only North–South are vulnerable, West should cash his

A next, guar-anteeing down three and beating East–Wests who bid and make a game.

If only East–West are vulnerable, West must consider underleading the

A. His decision to play for a penalty won’t appeal to many Wests, who will instead bid 2

or make a negative double. Even if East lacks the

K, East–West appear to have a game, and the result at many tables may be plus 630. To avoid a poor result, West may need plus 800: If East has the

K, he can get in to lead a fourth spade, promoting West’s