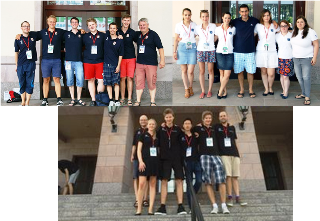 Photos by Rob Donkersloot, a The Netherlands journalist for CsbNews.org, Clara Klein Argentine team’s Coach and the rest were took of World Bridge Federation – Youth page made it by Mrs. Silvia Valentini:

After 4 of the six final sets these are the results:

After the semi-finals stage these are the teams that will meet in the finals:

These were the semifinals match results:

Ended the quarter finals these are the results:

Juniors: These are the countries playing the semifinals: Poland, Norway, the Netherlands and France

Girls: These are the countries playing the semifinals: Italy, the Netherlands, China and France

Youngsters: These are the countries playing the semifinals: Sweden, USA1, Norway and France

BUTLER RANKING – JUNIORS AFTER ROUND 21, All positions Click  Here

BUTLER RANKING – GIRLS AFTER ROUND 13, All Positions Click Here

BUTLER RANKING – YOUNGSTERS AFTER ROUND 15, All Positions Click Here

Today were played the last three round in the Junior category. These are the last positions:

The first 8 countries classified for the OK Stages.

The quarterfinals of the Girls and Youngsters series have been decided. This is the draw and the matches
start tomorrow. Juniors: At the end of the fifth day of play Poland took the lead, followed by France, China USA1, Turkey, Sweden, the Netherlands and Norway.

Kids: This category already defined the 2014 Champion. Poland is the 2014 World Champion of this category and second arrived France.

Juniors: At the end of the 4th day for the first time Turkey had to abandon the lead and was replaced by France, second finished USA2 and third Poland. The 8 teams that are till now in the qualifying positions are: France, USA2, Poland, Turkey, China, Sweden, Norway y The Netherlands.

Youngsters: The 8 teams that are till now in the qualifying positions are: Sweden, Norway, China Honk Kong, China, USA1, France, Czech R., Poland.

Girls: Italy begun the day in the second place but dethroned France to lead the field, The rest of the teams that are till now in the qualifying positions are: Netherlands, Australia, Poland, China, USA and Turkey.

Kids: This category begun the semifinal stage, these are today results:

These are the Kids’s consolation results:

Today the Junior, Youngsters y Kids played three matchs and the Girls played only two. Remember that only the first 8 teams in each category will arrive to the KO stage.

Juniors: After the second day, Turkey the home team is leading the Junior category with 115.84 VP, showing they have prepared thoroughly for this world championship and that to be at home always weighs in favor. China that since several years ago has seen reborn the bridge enthusiasm between the younger generations ranks second with 106.19 VP. Third Poland 103.11.

Youngsters: Sweden leads the field with 91.19 VP, second Norway and third is France.

Girls: France, several times World Champion in the ladies Category Damas, is leading the teams in the Girls category with 71.02 VP,  very close Italy with 70.57 is second. China third with 67.49.

Kids: Poland, France and China are in the first three positions.

The last results are:

With a welcoming speech by the President of the WBF, Mr. Gianarrigo Rona last night was inaugurated the 15th World Youth Bridge Teams Championships. Today were played the first 4 RR qualifier rounds of the Junior category and the first 3 rounds of the Youngsters, Girls and Kids categories.

At the end of the day these were the results in each category: