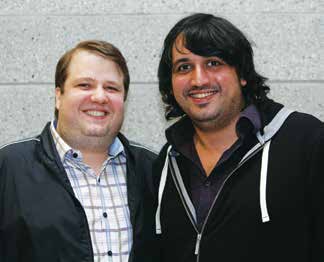 From now until December 7, read all the news from Providence 2014 in CsbNews.org.

Competition for the Reisinger Trophy (the Chicago Trophy until 1965) starts today. The event is a six-session open team-of-four event scored by board-a-match with two qualifying sessions, two semifinal sessions and two final sessions. The event is generally thought to be the toughest on the ACBL tournament calendar.

John Hurd and Justin Lall, the leaders in the Kaplan Blue Ribbon Pairs after four qualifying sessions, upped their lead in the first final session with a 63.96% game on their way to victory by more than a board.
Two Chicago-area players – Nick Demirev and Eldad Ginossar – were second. Hurd and Lall, playing together for only the second time, led by 2.82 matchpoints at the start of play Thursday. They increased their lead to 29.08
midway through the final and scored 53.84% score in the evening session to win comfortably. Top was 35. Their final margin over the runners-up was 43.87 matchpoints. Hurd and Lall are first-time winners of the Blue Ribbon Pairs, but they have separate victories in the Norman Kay Platinum Pairs – Hurd with Joel Wooldridge in 2011, Lall with Bob Hamman in 2012. Hurd now has five North American titles, Lall four. The only other time Hurd and Lall played together was at a regional in Las Vegas last summer. The second final session was interrupted briefly after the 11th round when it was necessary to call for medical assistance for one of the Blue Ribbon finalists. The player did not return to the game. The two pairs who did not get to play the final two rounds were given average-plus on the four boards they did not get to play. There was no word on the condition of the player who became ill.

Ginny Schuett and Jeff Schuett successfully defended their title in the Senior Mixed Pairs, becoming the first pair to repeat as champions in the four-year-old contest The Schuetts, of Riverwoods IL, qualified in 61st place, but then posted a 63.05% game in the first final session and a 59.13% in the second to win the event by 11 matchpoints (51 was top). The Schuetts won the event despite scoring two zeros in a single round in the second final session.
The runners-up were Lew Finkel of Palm Beach Gardens FL and Kerri Sanborn of Delray Beach FL. In third place were Ellen Cherniavsky of Silver Spring MD and Eugene Kales or Arlington VA.

Ina Demme and Bill Kertes narrowly won the 0-5000 Blue Ribbon Pairs, edging out the secondplace pair by less than a matchpoint. Demme, of Maple ON, and Kertes, of York ON, qualified midfield for the final and scored 53.85% in the first final. A nice 61.38% game in the second final was just enough to get them to the winners’ circle. Trailing the leaders by just 0.72 matchpoints were David MacRae and Christina van Leeuwen of Horn Lake MS. Third place was also extremely close. Richard Higgins and Greg Frank of Hot Springs Village AR were just 0.45 matchpoints out of second place.