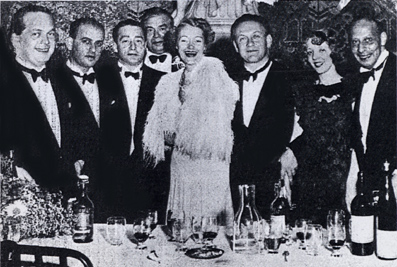 Dr Paul Stern founded the Austrian Bridge Federation in 1928. He was a bridge writer and co-inventor of  the Vienna bidding system. As a player, he won the European Championship at Scheveningen in 1932, and again in London in 1933. He was also the captain of the Austrian team that won the World Championship in 1937 in Budapest beating Ely Culbertson’s team.

After the Germans annexed Austria in 1938; he returned the Iron Cross he had won in World War I to the Nazi authorities, together with an insulting letter. They promptly put him on their extermination list as No. 11. This high placement in what was undoubtedly a very long list did not thrill Dr Stern who went into hiding and some time later managed to escape to England after an adventurous journey to Switzerland through the Austrian alps.

Whilst living in London, he often played rubber bridge at the famous Lederer’s club. Although previously a career diplomat, Paul did not tolerate fools gladly and some of his outbursts eventually attracted the attention of the press.

A reporter interviewed him one day and asked him why he sometimes used expressions such as `ass’, `ox’, and `donkey’ when addressing his partners.

Always the diplomat, Paul replied coolly: “It is my way to show how much I love animals.”

The reporter now played his trump card: “What about the report that you once threw a cup of coffee at your partner?”
Paul dismissed the incident with an imperial gesture in the air: “It was nothing serious,” he said. “There was no sugar in it!”