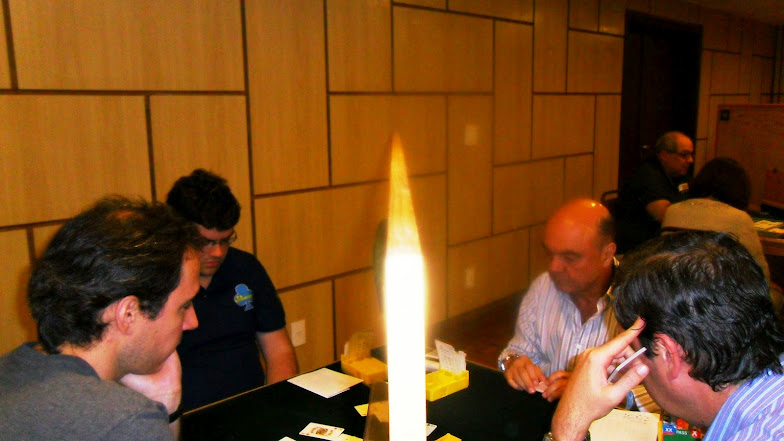 The Brazilian wish bracelet: Senhor do Bonfim wrist ribbons, known as fitas, are an institution in the northeastern Brazilian state of Bahia. Senhor do Bonfim, means Our Lord of a Good End. In popular tradition, the Senhor do Bonfin´s ribbon is wrapped around the wrist and secured with three knots. Each node follows a request made mentally, that must be kept secret until the tape breaks for wear and tear, to fulfill.

This year the Brazilian Open (named the Brasileiro in Brazil), the most important bridge event of Brazil was played in San Salvador de Bahia from the 1st to the 9th of  September and for the legendary brazilian player Gabriel Chagas the event finished with a good end. Gabriel won both Brasileiro’s tournaments, the pairs event playing with Carlos Pellegrini and the Teams Event playing with Carlos Pellegrini and Alejandro Bianchedi-Ernesto Muzzio. The team event comprised two stages, the first four teams of an initial Round Robin, played a second two rounds Round Robin. One of the most instructive boards was played the last day of the teams event.

Chagas opened the hand with a 1

as spades was his partner’s suit, and he couldn’t bid 4

because of his lack of heart control, so he find an almost last train bid in his 5

K and a lot of courage declared the slam.

Brenner’s lead was the best one, with all the other leads the play is much easier as declarer can ruff his heart losers in dummy. Declarer won the trick in his hand, played the

K and continued with the

10, trying to stop West’s diamond return, but Diego won the trick with his

A and played a diamond. Pellegrini won in his hand, ruffed a heart and played the

A (pitching a club from his hand) and continued with another spade (ruffed in his hand) to investigate the spade distribution. When Madala pitched a heart he knew he wouldn’t be able to discard a loser in dummies fifth spade and so he had only a last resource available for a good end, a possible squezze.

9…bad luck…and what an irony that the