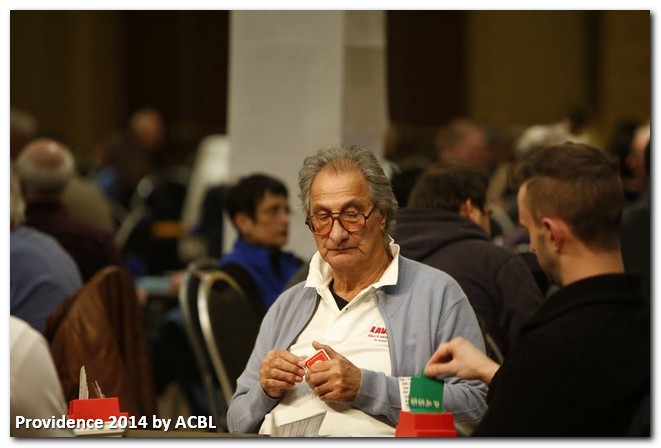 The term «safety play» refers to one of any number of techniques for overcoming an adverse distribution, perhaps sacrificing an overtrick to ensure a contract. The term «danger play» is less frequently found in the literature; it refers to a manoeuvre that guards against an unlikely distribution but loses a vital trick if the lie of cards is more or less normal. One of the most spectacular danger plays in history occurred in an Olympiad semi-final between Austria and Poland. It was the final board and Austria had a lead of just 3 IMPs, Game all, dealer North. So firmly is the advice «find your 4-4 major-suit fits» drummed into all of our heads that no one was particularly surprised when both North-South pairs reached contracts of four hearts, which was hopeless, instead of three no trumps, which was laydown. East at both tables doubled four hearts, and when Poland were North-South the play was perfectly ordinary. With North declarer, East cashed his king of hearts to look at the dummy; what he saw there encouraged him to cash the aces of spades and clubs, then try to give his partner a club ruff. That didn’t work, but soon his ace of trumps made a trick and Austria scored plus 200. It was impossible to imagine any better result for Poland from the table where Austria sat North-South, but the play there had been painfully slow and everybody had to sit and wait for almost an hour before the result came through.

When it did, it was greeted with utter disbelief that soon turned into Polish joy and Austrian misery. A conventional auction made South declarer in four hearts, but didn’t deter East from doubling it. West led a club, and East won the ace, cashed the ace of spades, and led a second round of the suit. Declarer ruffed with the seven of hearts, to guard against the remote possibility that East had six spades and the eight of hearts. This was not fatal, but he next attacked trumps by leading the ten of hearts to East’s king. East played another spade, and declarer ruffed with the queen. That was fatal – a second round of trumps went to the nine and ace, and a fourth round of spades was ruffed by West. 500 and 7 IMPs to Poland.