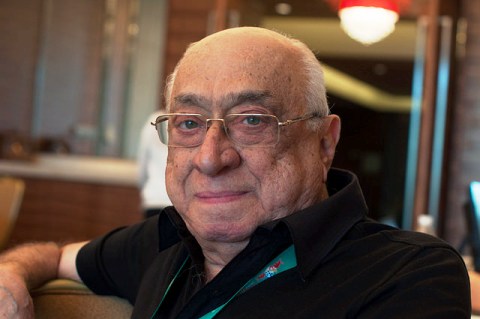 Yesterday at the San Pablo Bridge Club, was played the first stage of the 2014 Tasa de San Pablo final, where d’Orsi team faced Carvalho teams, till now the outcome is:

The team’s players are:

These are some of the key boards of the 32 ones played yesterday. Till Board 6 d’Orsi team had managed to distance himself another 6 IMPs, when this board arrived to the table: from his partner, Campos chose to play 3NT. The cards layout makes impossible to win the contract and in the way to try for 9 tricks, JP finished 4 down.

At the other table Stefano-Dib chose to play 5

. The only lead to defeat the contract is

J, but at the table d’Orsi chose the

K and fulfilled his contract. The board was worth 14 IMPs… for Carvalho.

Board 9 was the first one to unbalance the match in favor of d’Orsi, who from then only strengthened his lead as more boards arrived to the table. After listening his partner’s 1

Miguel asked keycards, and when he learned they had all of them, asked for the kings, the

K response took him to mention his

K, Campos with the

Q, count 13 and declared the Grand Slam. Declarer claimed in trick one.

At the other table Carvalho only arrived to the heart slam and lost 13 IMPs in the attempt.

where Carvalho was one down in the same contract.

The last double swing of the first set was Board 13: After the 1NT Ernesto d’Orsi opening bid , Dib showed his hearts and N/S arrived to the 3NT contract.

J, d’Orsi won with his

K and with no hopes played a small diamond. Dib played his king and played his

At the other table Ravenna and Thoma arrived to the same contract with the same sequence, Campos led his

10. The declarer won the lead to continue with a spade, Vilas Boas in East won with his ace returned a heart and two down.

d’Orsi added another 8 IMPs in the first two hands of this set, when the third one arrived: , and Dib showed his clubs. Figueiredo passed, and Carvalho informed about his spades, South pass and Dib, with a void in his partner’s suit, repeated his suit, this gave Figueiredo enough air to mention his hearts. Carvalho continued with an agressive heart cuebid, and d’Orsi doubled, after two pass, East corrected to 5

and Dib continued to slam. Figueiredo with the

Figueiredo made the best lead: The declarer won the lead with his king, cross ruffed two hearts and two spades, draw trumps and when he saw the

K when he played the

A, claimed his contract. At the other table E/W chose to play the club game, 14 IMPs for Carvalho. Junqueira showed his first control, the

A and Fernandes continued informing about his diamond values, this was enough for East, he closed the slam.

K position, gave the 12 trick to declarer,and  another 13 IMPs for his team when at the other table Carvalho only played game.

In the next three boards Carvalho team managed to recover 16 IMPs but as often happens in bridge, the team d’Orsi rose to a wave of winning boards until the end of the set, in which they get to add 50 IMPs, to end the first stage of the final with a lead of 80 IMPs …